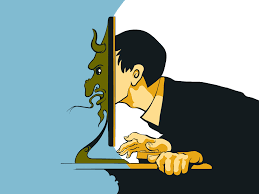 Dr Michelle Hunter-Hill, Chartered Psychologist discusses the behaviour and impact of online trolls, and offers suggestions on how to tackle it.

What are trolls made of? Definitely NOT sugar, spice and all things nice. Trolls are mythical beasts that plague social media platforms (Forbes, 2020). They are somewhat unstoppable and deliberate in their efforts to target and post inflammatory, derogatory or provocative messages about their victims on Facebook, Instagram, and Twitter. A troll’s core aim is to cause defamatory and psychological damage to their victims. Research into trolling behaviour, consistently shows that personality plays a huge role in their bullying behaviour. Personality traits such as narcissism, machiavellianism, psychopathy, and sadism (which make up what is known as the “Dark Tetrad”) are common amongst trolls.

Despite that mentioned above, trolling impacts victims differently. While some victims are severely impacted and report feeling distressed, depressed and anxious, others show high levels of resilience and do not let it bother them. In as much as we can choose how we respond to harmful stimuli, it is fair to say that much of these differences in our response style can be attributed to personality and other, dispositional, and situational factors. Therefore, understanding what constitutes trolling, and how victims respond to it is now more important than ever as this behaviour increases.

The core questions that need answering include: what can individuals do to protect themselves from being trolled, particuarly the impact? What can leaders/organisations do to protect those who are likely to be impacted by trolling in their care? Every week, at the [email protected] Clinic, run by Dr Hunter-Hill, we help clients to deal with this type of victimisation through the provision of advice, resilience coaching and training. Ensuring psychological safety and mental wellness is a core priority at the Practice.

In this digital age, arguably we have the privilege of being able  to access information about most things at the tip of our fingertips. Spending much time online is a modern-day reality. However, information online is being used for benign as well as malign purposes. For example, trolling encompasses any form of bullying behaviour that takes place online, through smartphones, tablets, or computers. It can be through public messages, posts, photographs or groups, via social media, networking apps, gaming sites, chat rooms, or video sharing platforms. Unlike bullying in-person, online bullying can happen anytime, anywhere. Such behaviours can have a huge psychological impact, leaving victims feeling on edge and under attack at all times, as they never know when or where the next message will come.

Contrary to the popular belief that in-person bullying is more serious than that of digital bullying, research studies are beginning to show a very different perspective. Digital bullying can be a persistent, hard-to-spot form of bullying that appears to be boundaryless. Unlike other types of bullying, it can happen anytime, anywhere - surprisingly even in the safety of your own home.  In the case of in-person bullying, victims are aware of the who their bully is - or bullies are. On the other hand, digital bullies have an extra advantage: the internet provides them with an extra layer of anonymity.

These types of bullies can mask their identity behind pseudonyms and fake profile pictures. Besides, digital bullies tend to be more detached from their actions, and the consequences of such actions. It diminishes bullies responsibilities and reduces the fear of being caught. Therefore, victims are unaware of the identity of their bullies, which lessens the chance of them being caught and made accountable for their actions. Nonetheless, cyber/digital bullying can be traced as there is often some form of a “paper trail” where negative comments/threats can be viewed.

Online/digital bullying is considered more subtle than physical bullying. Because of what is referred to as ‘online disinhibition effect’, similar to psychopaths digital bullies feel little remorse. The online disinhibition effect concerns the lack of restraint one feels when communicating online as oppossed to in-person. People feel comfortable communicating their views because they have they can remain completely anonymous. Nonetheless, the inappropriate and antisocial behaviours trolls employ online to strengthen their attacks, such as the use of hostile language and threats can still severely impact their victims, because the comments are 'real' irrespective of the author being unidentifiable. However, in people tend to behave differently online to how they behave in real life, including the decision to troll, and equally the decision to report the crime.

The psychological impact of digital bullying can lead to poor mental health, low self-esteem, negative self-concept  and a barrage of other psychological problems. Our digital footprint appears to be available online forever, making it difficult to remove the harsh comments or footage that has been uploaded, in most cases to damage the reputation of an individual. This can cause an undue amount of stress, which due to its predominately psychological impact, may be difficult to detect, causing further and prolonged stress.

Unfortunately, the responsibility of tackling this trolling problem falls on the victims - those who are being impacted are expected to act first, rather than the platforms or communities as a whole standing up to protect and defend users. In saying this, a new Online Safety Bill has recently been proposed, which aims to impose a duty of care on tech companies to protect users from harmful content, at the risk of a substantial fine brought by Ofcom, the communications industry regulator implementing the act. As with most new interventions, we will have to wait to observe the impact of this Bill, as there is no guarantee that it will prevent trolling or digital bullying.

In the meantime, if we as as a society, employees, citizen, groups, teams, and individuals, could see it as our social responsibility to work together to raise awareness of digital bullying, and tackle the issue collectively, that would be a worthy contribution. For example, while some companies refrain from seeing trolling as a key priority on their agenda, other companies recognise the impact of such behaviours on the individual, and have spearheaded many creative initiatives to raise awareness and tackle this.

What to do if you become a victim of digital bullying:

What should organisations do to protect you from digital bullying?

Disclaimer: The content generated on this blog is for information purposes only. This Article gives the views and opinions of the authors.

Dr Michelle Hunter-Hill is a Chartered Psychologist, Behavioural Scientist and Coach who specialises in advising on trolling, and the psychological safety of workers/contributors in various occupational settings (offices, remote-working, on screen, on track/field/pitch). Dr Hunter-Hill creates psychometric profiles (assessments) of trolls/digital bullies, and deviant types such as narcissistic leaders, extreme risk takers and more. Dr Hunter-Hill runs the [email protected] Clinic, and The Psychometrics Cafe’. Dr Hunter-Hill is Director of the MSc Occupational and Business Psychology programme at University of Roehampton.